Derek and I recently adopted 2 kittens through the Pet Alliance of Greater Orlando. The new safety procedures required a bit of faith. We could only meet the kittens by Facetime before we adopted them. Not that kitten interview questions change such as “ What are your thoughts around Temptations treats?” when you aren’t in the room, but you do look for that feeling of connection when you are adopting a pet. In normal times that comes from holding them, but these are far from normal times. So, by the grace of Facetime, we got a male kitten named Reider a few months ago, and we got a female kitten a few weeks ago named Princess Leia.
It has been awhile since we have had a kitten so Derek read up on how to introduce a previously stray cat to your home, and he found out that it works best to start small. So, when Reider came home we put him into a spare bedroom at first. We let him get comfortable and then opened up more of the house to him as he started to explore on his own. We did the same thing with Princess Leia. It worked out great, as they got more comfortable with their surroundings, we would open another door and let them go in when they felt safe to do so. 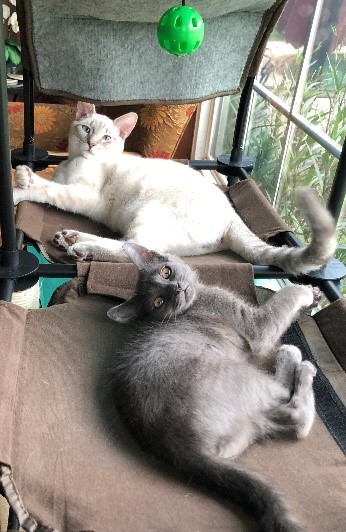 I have to be honest with you, since March it has felt like Derek and I have also been stuck in the guest room, called our house, trying to figure out where we can go and explore and feel safe. The outside world is calling us to come back. Mostly with “SALE” signs. We recently went to the Mall at Millenia, which has done a great job with their safety protocols, and the sales were unbelievable. Yes, we had to walk around in the air conditioning wearing face masks and carrying hand sanitizer and yes, there is inherent risk with everything. It just felt good to be smart and to do something that seemed somewhat normal.

One of the other first things that I did was to go to an Orlando Power Yoga class as soon as they reopened. They have implemented simple safety measures. Now I have to reserve my place in the class, enter the room from one side and exit through the other. I can do that, and it feels so good to just say “I’m going to yoga!”

Derek recently decided to take advantage of some incredible service specials at the Woodhouse Day Spa. He came home and told me that the staff had done a great job maintaining the social distance of the clients in the lobby and waiting room area and that wearing a face mask during a massage wasn’t as awkward as it sounds. What excited him the most was a service that he had never done before called The Restore and Firm Microderm Facial. Apparently, they can literally suck the sad and ugly right off of your face! How did we not know about this! I’m pretty sure if that option was on the ballot, he would vote to have it be the next nation-wide stimulus.

You know you best. When a door of opportunity opens up, just be smart and take those baby kitten steps. Even if that just means you take a walk, a little fresh air can brighten your perspective. And we all know a brighter perspective can change everything.

What’s Your Dr. Phillips-Windermere Home Worth?

Are you thinking of selling your home or interested in learning about home prices in your neighborhood? We can help you. Call or email me today at 407-270-0011 mark@themarkrameygroup.com

Get FREE instant access to local homes from any mobile device.

• Among the top 1% of Real Estate Professionals in the Orlando Region
• Voted “Orlando Magazines – Hot 100 Realtor” for multiple years
• Recognized as a “5 Star – Customer Satisfaction” Professional for multiple years
• Member of the National Association of Realtors and a Member of the Orlando Regional Board of Realtor
• 20+ years of Finance and Real Estate experience with a team that specializes in Residential and Investment Real Estate sales and purchases. Mark is an active, full time Realtor with a large center of influence in the greater Orlando area. A consistent top performer, Mark and his team have received the following honors for multiple years; Top Listing Agent, Top Selling Agent, Most Closed Units and Highest closed Volume.

Born and raised in Chicago Illinois, I left the windy city and a career in auto sales and finance in 1998 when I moved to Orlando Florida. It only took one glorious winter to realize that this was my new home. I quickly started my new career as a Real Estate agent so that I could help others in their quest to live here in Winter Paradise.